Cyprus is currently in the process of implementing the EU Anti-Tax-Avoidance Directive (ATAD), which basically aims at preventing multinational companies sheltering their profits in low or no tax jurisdictions.

ATAD is the European Union’s answer to the OECD Base Erosion and Profit Shifting action plan, commonly referred to as BEPS.  It aspires to ensure that taxes are paid where the value is created. To achieve these goals, ATAD sets out identical rules for all the players of the game and multinational companies in particular. EU countries, including Cyprus, are obliged to implement ATAD at the required dates being 1 January 2019 and 1 January 2020.

Specifically, it is expected that the relevant provisions relating to Interest Limitations, Controlled Foreign Corporation (CFC) rules, and General Anti-Abuse Rules (GAAR) will be included in the local legislation and will be retroactively effective as from 1 January 2019.

For Exit Tax rules as well as for Hybrid Mismatches, the relevant provisions are expected to be voted within 2019 with an effective date of 1 January 2020. 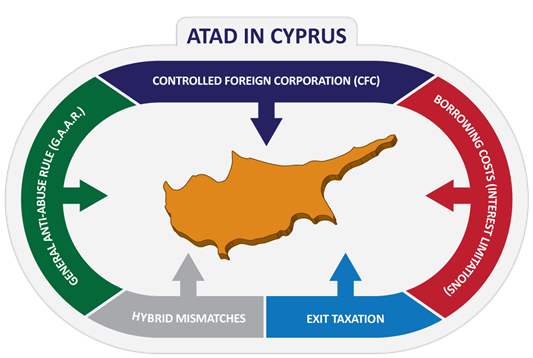 This tax alert aims at proving an easy to follow, yet compressive analysis on these proposed provisions and their expected impact on the Cyprus Tax Legislation.

Controlled Foreign Corporation (CFC) is a fairly new concept in Cyprus. This concept aims at allocating income to a Cyprus tax resident company when its subsidiary or permanent establishment is located in a low or no tax jurisdiction, even if this income is not actually distributed as dividend (subject to conditions).

The definition of a CFC is expected to be the same as in ATAD, namely an overseas permanent establishment or company directly or indirectly controlled by a Cyprus tax resident company, the corporate profit tax burden of which is less than half of what it would be under the Cyprus tax system i.e. 6.25%.

The provisions to be implemented in the Cyprus tax legislation are expected to adopt the approach set out in Article 7 of the ATAD under which specified categories of income including interest, royalties and dividends receivable by the CFC are to be included as current income in the tax base of the Cyprus parent and taxed in accordance with Cyprus rules, unless the CFC is resident in an EU or European Economic Area country and engages in substantive economic activities.

Once implementing the relevant provisions, it may be necessary to review existing Cyprus holding structures in light of the new CFC rules under the ATAD.

The most significant provision of the ATAD in practice is likely to be the introduction of fixed-ratio interest limitation rules.

The new provisions are expected to deny a deduction in respect of net interest expense (being gross interest expense less interest income) that exceeds 30% of the taxpayer’s EBITDA (profit adjusted for tax purposes before interest, tax, depreciation and amortization) or €3 million, whichever is higher.

The rule will not apply to wholly independent companies (i.e. a taxpayer that is not part of a group for financial reporting purposes and has no investments in associated companies (minimum 25% participation)) or financial institutions. Certain public infrastructure projects and their associated income are expected to be outside the applicability of the specific provisions, together with financial arrangements entered into before 17 June 2016 and not subsequently amended.

The interest costs to be restricted may be carried forward for up to five years.

In general, Cyprus companies in multinational groups tend not to be heavily leveraged in light of the restrictive nature of Cyprus tax provisions on interest when compared with other jurisdictions. Furthermore, many Cyprus financing companies may not be affected by the interest limitation rules on the basis that the interest receipts of such companies should exceed their interest expenses.

The draft provisions regarding exit taxation provide for taxpayers to be liable to tax being equal to the difference between the market value and the value for tax purposes of assets to be transferred outside the net of the Cyprus tax legislation while remaining under the same ownership.

Taxpayers may settle the exit taxes with instalments over five years.

The proposed effective date is 1 January 2020, as in the ATAD.

The new provisions will allow the Commissioner of Taxation to disregard artificial arrangements whose main purposes include obtaining a tax advantage that defeats the object or purpose of the tax laws.

The Cyprus tax legislation and more specifically the Assessment and Collection of Taxes Law already contains a GAAR and therefore the amending provisions are not expected to have significant implications on Cypriot taxpayers.

Hybrid mismatches exploit differences between tax systems to achieve double non-taxation i.e.  double deduction, deduction without inclusion and non-taxation without inclusion. For example, a payment in one Member State can be considered as interest (which will be tax deductible for tax purposes) and in the other Member State as dividend (which is will be non-taxable).

The anti-hybrid rules are expected to apply to cases between associated taxpayers in two or more Member States or structured arrangements between parties in Member States that, arising from differences in the legal characterisation of a financial instrument or entity, result in:

The Cyprus tax system is relatively straightforward, and it is unusual to see Cypriot instruments or entities that have a different legal characterisation in another EU Member State. Therefore, the amending provisions are not expected to have significant implications on Cypriot taxpayers.

As can be derived from the above, the transposition of the ATAD’s provisions within the Cyprus tax legislation will have a significant and direct impact on the tax infrastructure in Cyprus. In addition to providing for the introduction of entirely new concepts, certain elements of the Cyprus tax legislation may need to be realigned to complement the implementation of the ATAD measures.