The Green Deal webinar took place on 2nd of February, 2021. The webinar covered the Business Opportunities that the Green Deal can bring to companies operating in the European Union and was held with the participation of the European Commission. 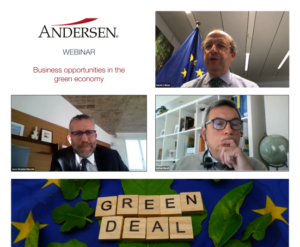 February 2021 – Climate change and environmental degradation are existential threats to the world and so to the European Union. To overcome these challenges, as the European Union wants to be the first climate-neutral continent, the Union needs a new growth strategy that shall transform its financial system into a modern, resource-efficient and competitive one. That is why the European Green Deal is the EU plan to turn the European Union sustainable by 2050. Mobilizing at least €1 trillion of investments over the course of 10 years.

This roadmap and the opportunities that the green economy can bring to EU companies, were some of the topics discussed in the Webinar organized by Andersen with the special participation of Daniel Calleja, Director-General Legal Service at the European Commission. José Vicente Morote, European Legal Coordinator at Andersen and Country Managing Partner in Spain, introduced and moderated the event. Rafael Ripoll, Of Counsel at Andersen in Spain and former Regional Secretary for Relations with the State and the European Union of the Valencian Government as well as responsible of the International Development Cooperation department, was in charge of the introduction of the Guest Speaker.

Europe has shown that is possible to lead the fight against climate change and at the same time make the economy grow. Between 1990 and 2018, greenhouse gas emissions decreased by 23%, while the economy grew by 61%. In his speech, Calleja said that it is possible to dissociate economic growth from the negative environmental impact. Through the Green Deal there is an opportunity and also, a way to support European companies to become world leaders in clean products and technologies.

José Vicente Morote, stated that besides the climate impact that the Green Deal will bring to the EU, the concrete measures taken by the European Commission in order to guarantee its execution, open a large range of opportunities to businesses. And he added that the economy and the environment should look in the same direction.

On the other side, Rafael Ripoll, Of Counsel of Andersen in Spain detail that all industries of the economy will be involved in this process, but some sectors will be more affected such as: Transport, Buildings, Environmental, Energy, Agri-food, Water management, Waste management. Also sectors like finance will have a role in directing private capital towards more sustainable investments.

Find the presentation of the webinar here

And the Q&A section here